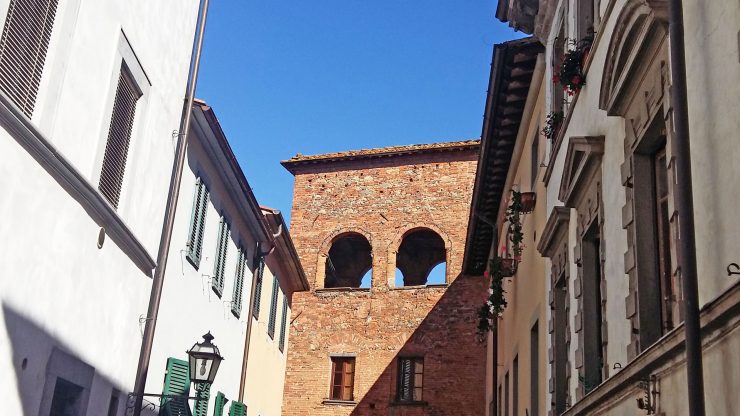 Montecarlo’s town, located on the hill ridge separating Valdinievole and the Plain of Lucca, was built in 1333 in order to bring together, near the fort of Cerruglio, the inhabitants of the Community of Vivinaia (located where now is the village cemetery) and destroyed by the Florentines in 1331. The borough was named Montecarlo (the Mountain of Charles) in honour of Prince Charles, son of the King John of Bohemia, liberator of Lucca from occupation by Pisa. The prince, who became Emperor with the name of Charles IV.

The Rocca del Cerruglio, ancient name for the fortress, probably dates back to the XIIIth century AD. This fortress, is the Most important  historical  symbol of Montecarlo.

The Collegiate Church of Sant’Andrea was restructured towards the end of the eighteenth century, it still has its fourteenth-century facade and portal. Inside is the chapel of the Madonna del Soccorso,  patron saint  of the people of Montecarlo.

The Rassicurati Munipal Theatre was built in the early years of the eighteenth century by an association of wealthy landowners of the town, called Accademia degli Assicurati. The first certain mention of its long activity dates back to 1791, when the Grand-duke of Tuscany decreed its reopening; subsequently, in 1796, the building was completely restructured at the hands of Antonio Capretti. The Theatre is today the fulcrum of a remarkable amount of cultural and theatre events., and resumed its brilliant activity.

Don’t forget to taste the DOC white wine of Montecarlo