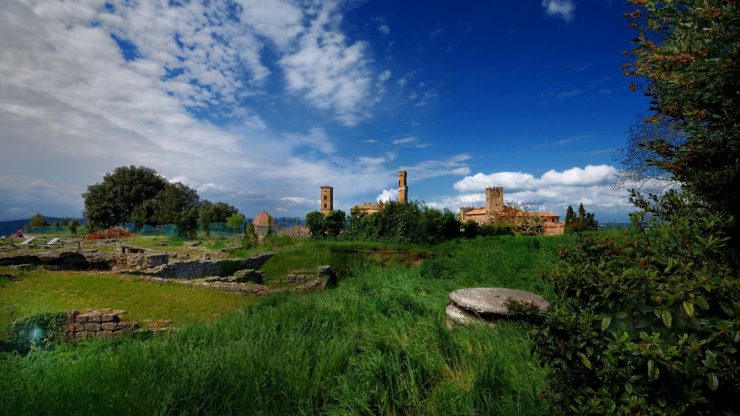 Etruscans’ town visit in one day

Volterra is a beautiful village with a medieval appearance, but its origins date back to the Etruscans. The village is surrounded by a double wall, the Etruscan one and the one from the 12th century. It has been known for centuries for the working of alabaster, one of the most important products of Italian craftsmanship.

Porta all’Arco or Etruscan Gate is part of the ancient defensive walls of the fifth century BC. – originally extended for a distance of more than 7 km

Cathedral Santa Maria Assunta. The interior, has three naves and a late-Renaissance appearance. The space is divided by twenty-two columns covered with stucco; the walls are painted in stripes of white and gray; the presbytery and the floor are the result of the nineteenth-century restoration.

It is the city hall. It was designed by Maestro Riccardo in 1239; it has a three storey façade with trilobed double arched windows in the Medieval style. The tower is considered to be one of the first towers built in Volterra.

The Civic Museum boasts the town’s most important painting from the late Renaissance period – Rosso Fiorentino’s Deposition from the Cross is a Mannerist masterpiece from 1521. The rest of the museum contains works that demonstrate the alternating dominations of the Senese and Florentines.

Volterra hosts a museum dedicated to this precious material, transparent and tough at the same time, already used by the Etruscans to make urns and ornaments. The museum, housed in a former Augustinian monastery of the twelfth century.

At the foot of the city rises the majestic Roman Ampitheatre (1st century BCE), definitely one of the greatest Roman finds in Tuscany.

It contains important Etruscan testimonies: thousands of funeral urns, jewelry, pottery, and other objects from local archaeological digs. The museum was founded in 1761 by a noble abbot, Mario Guarnacci, who collected antiquities and donated his archeological collection to “the citizens of the city of Volterra”.